I think I've just figured out what is wrong with my copy of iPhone 6. It is indeed Perfect In Every Way. It's just that, in a moment of weakness, a colossal Charlie Foxtrot has been made that is going to cost someone a chunk of change.

The representative at Verizon talked me into getting a screen protector for the phone. Specifically, the product in question is "Tempered Glass Display Protector 1-Pack fits/para 2014 New iPhone (4.7")". I think the problem is that there is three microphones on the device, just as there is on the iPhone 5.

I think the primary microphone on the iPhone 6 when you're making a phone call and the device isn't in speakerphone mode is above the earpiece. To confirm this, I made a voice post where I tapped on top of the front mic's hole. You can hear this tapping, but it is a little faint. That could be due to the fact that the Tempered Glass®™ creates that much of a seal. It could also be indicative of a faulty microphone and the Tempered Glass is only exacerbating an existing problem in (what is presumably) my copy. (When I Google for "iPhone 6 microphone doesn't work during call NOT on speakerphone" and its variants, I can pull up one or two entries on Apple's forums about people leaving the plastic on the phone and how removing it solves their problem. But they have usually complained about people on the other end of calls being able to hear them if they are in "regular" mode, but not if they are in speakerphone mode.)

I made a second voice post in which I yelled at the hole above the earpiece. I can't hear me at all in that recording.

The question now is, has my engaging in science doomed me to spending a bunch of money over a $25 piece of plastic that was designed to protect the phone? The problem gets thornier because I think that Verizon will bounce me to Apple and Apple is within their rights to send me back to Verizon. Fair enough. The question becomes, what happens if trying to remove this protector results in damage to the phone? Who is liable then? Furthermore, is there really a fault with my copy of the phone or is it the fault of the "screen protector"?

I'm currently on hold with Apple after having explained my findings to the patient tech support person ("Ben"). He fully understands the issue. I asked him to find out which microphone is the primary microphone when in regular call mode and to try to get my issue exposure in the system to see if other people are having the same problem.

"Wendell" was the Senior Advisor who my call got bumped up to. We went through a recap and then a discussion of the best way to proceed with my issue. He was prescient enough to ask if I had the packaging for Tempered Glass®™ and if so, was there a manufacturer listed on it. I had already looked over the packaging several times, but found nothing. Finally, my eye caught that Tempered Glass®™ was manufactured by Newvit Co. Ltd.

Wendell advised me to continue with my scheduled appointment with the Genius Bar as the Apple Retail store may have the correct tools for the job of removing Tempered Glass®™.

That's all the news that's fit to print. When I know more, you will you, Dear Reader.

My new iPhone 6 is perfect in every way…except for the fact that persons on the other end of the call can't hear me when the phone is NOT on speakerphone.

So I was in Target grocery shopping earlier today when I heard some beautiful violin music. At first, I thought it was one of those isle-end displays where there’s a bunch of CDs its advertising and you select the album you want and you get like a 30 second sample. It turned out to be a television playing music–appropriately enough–above the music section.

What’s more, it was something from Lindsey Stirling’s album, Shatter Me. I immediately searched for it in the iTunes Music Store and added the album to my wish list for obvious reasons (i.e. I liked what I heard, wanted to add it to my collection and I wanted a device to do the job of remembering that idea for me.)

So earlier this evening, I loaded the album up in iTunes and decided to preview the album. While I like the artistry, I’m not sure that I would listen to any of those songs more than a handful of times. Of course, me being Tomas, I had to overthink this.

See, I want to support Stirling, but I don’t want to spend the $10 on something I’m not going to use. I’d be lying if I said that I haven’t spent more money on less and would be delusional to think that I won’t waste money in the future. But for some reason, this is coming down to a principle/ethical thing for me. I don’t know why I’m obsessed on this problem but I am.

It may have to do with a recent musical experience.

See, I never got the whole Pandora/Spotify/rdio/last.fm thing. I think (though I have no hard data and perhaps false memories to draw upon) those kinds of services are most suited to pop music. That’s not to say I don’t listen to pop music, but I’m not a modern man in this regard. And I’m more of an album kind-of-guy; I grew up with albums and don’t believe in buying individual tracks, except when it comes to pop music.

For example, when I was building my collection of “Oldies” music, I would remember a song or hear it in a film or what-have-you and then I would go look it up and add just that song to my collection. We’re talking about things like the Beetles, Rolling Stone, Elvis Presley, etc. Now, yes, I know the Beetles are famous for their albums, but I’m not aware of their albums being a continuous piece of work like say Pink Floyd’s Dark Side of the Moon (which, ironically, I’ve never listened to.)

It may also help to point out that I enjoy listening to scores and grew up listening to classical music. Both of these are meant to be consumed as a unit consisting of many parts, though it is true that some lend themselves to piecemeal more than others.

But I must confess that my main method of music discovery is through episodic television content. I’m sure there was a gaggle of people responsible for the needle-drop music in House; I am externally grateful to them and the masterminds behind Have Dog Will Travel: I have added many songs to my collection because of that show and website. I’ve picked up one or two songs thanks to Justified but not nearly as many as House.

Not surprisingly, I’ve picked up music from another show, though I’m ashamed that I haven’t done so long before now. Those that know me well will have, of course, guessed Top Gear. Apparently, there’s a site called Tune Find that has done for many TV shows what Have Dog Will Travel did for House. So it was that I was watching some episode of Top Gear (I forget which) when James was doing a piece. Experience from In a Time Lapse played and I was able to identify it along with a track from Snitch.

The premise of Snitch sounds interesting, though I’m sure it’s as predictable as Taken. (Also, note to self, watch The Counselor and The Next Three Days) But I’m disappointed in the $10 that I paid for the score. There’s really only one track worth listening to. I think it’s because of that recent purchase, I’m reticent to support Stirling’s album.

I thought about trying to explain all of this to a tweet directed to her, but I couldn't even make that work in my head, much less real life. "Dear Lindsey, I love your art, hate your work and but am too cheap to support it." Yeah.

So I went on Twitter to send Miss Stirling a link to this blog post only to find out that her grandmother died recently. Now I really do feel like a two-bit piece of shit.

I'm starting a new meme: post a picture (or pictures) of your bookcase so others can clearly see what you have you your shelf and invite people to ask you why you chose to add that book to your collection.

Almost without exception, all the books pictured here are to be read. 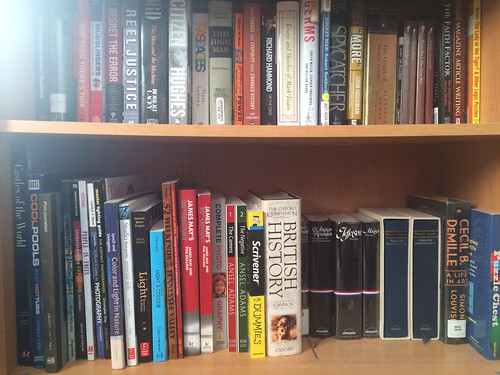 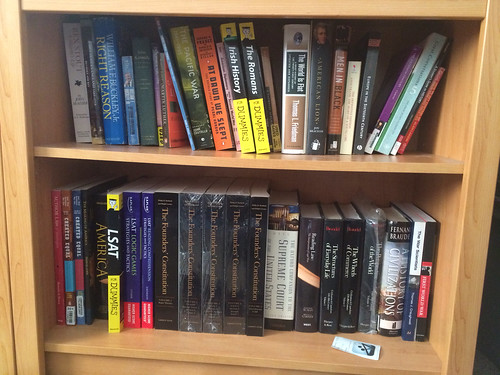 newmistakes to participate in this meme! 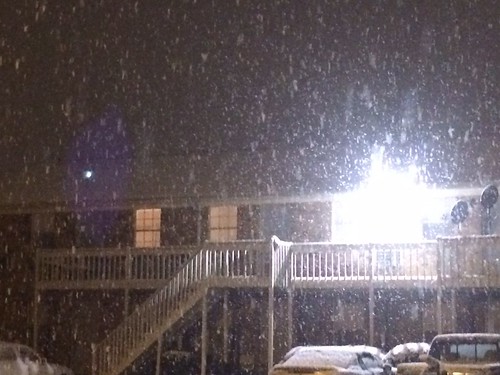 Since I find myself taking pictures as #DeepFreeze14 drags on, I thought it would make sense to create a gallery for my image somewhere. Therefore, I've created a Flickr set for just that purpose. 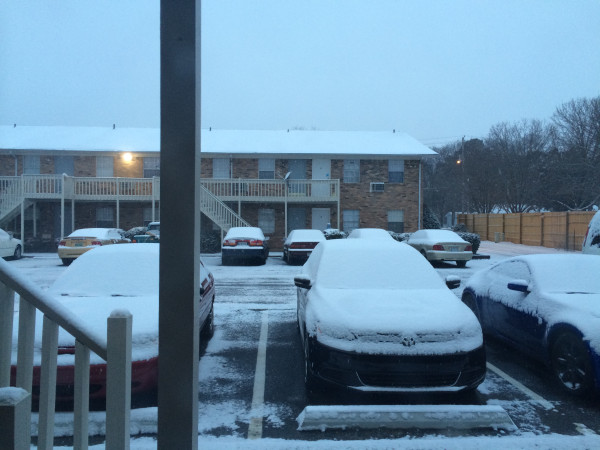 No work. No pants.

Just got an email from work stating they'll be opening at 1000. Here's hoping they decide to just keep the building shut all day. 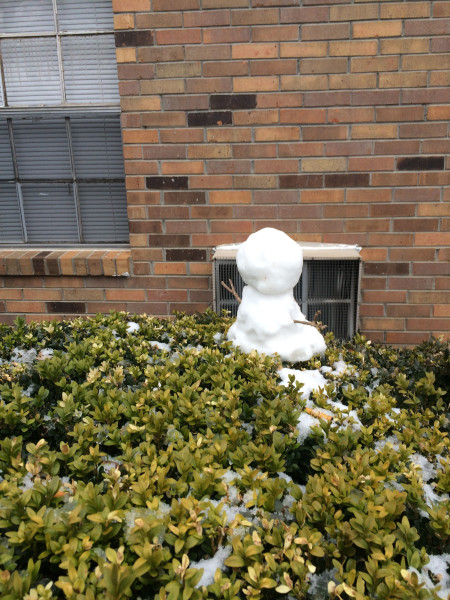 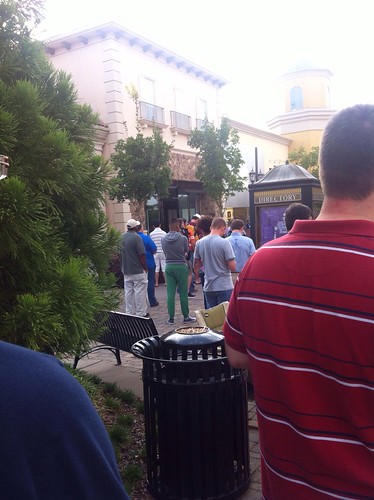 View from where I started in line

I've just been enlightened about the production of both a feature film and a documentary being produced about Francis Scott Key and our national anthem. I don't have any details on when either of these will be available for general release, but I would encourage you to follow the project on Twitter and Facebook. The production website can be found at http://www.fskusa.org.
Collapse