A Treat for Myself: History of the World War

newmistakes that I would eventually post about a treat that I got myself and I'm just now getting around to doing so.

Two or three years ago, Dad showed me an amazing set of books: five, blue cloth-like volumes written by Frank H. Simonds; this was History of the World War. That there is no indication of which world war should be a clue: the set is about the First World War. In fact, the series was written by Simonds during the war, but according to the preface, Simonds, an American, wasn't able to start writing about the war until 1917 for security/political reasons. (This was a gag that was imposed on all authors and journalists if I understand the situation correctly. I think it might have been ok to write reports about what was happening, but publishing in-depth histories was considered taboo.)

As I had briefly studied World War I in a course on European 20th Century History, I really wanted to read these books.

Dad said he had been to an estate sale and picked up the set for $50. His copy of the work had been very well cared for.

When I deigned to go to the lake house and see the books on the shelf, I would ask him to give them to me or at least to let me borrow them, especially after I found out that he hadn't finished reading the preface, much less was actually reading the series himself. He would say that I could borrow a volume at a time, but knowing that I wouldn't be at the lake house that often, I didn't want to limit myself.

I had tried to find a complete set myself online, but my Google-fu was low. I could find two sales on eBay that I could put together, but nothing more. And it was going to cost at least $75, shipping not included. So I gave up looking.

I had heard of this wonderful new service called Get Magic via Gizmodo's article A Same-Day Delivery Startup Brought Me a Fish We Both Assumed Would Die which was possibly introduced to me via Daring Fireball. I had signed up for the waitlist and eventually, though enough bitching on Twitter got taken off the list. But other than confirming that they could receive my SMSes via the Messages app on OS X Yosemite, I hadn't really used the service. I was thinking about what I could get them to do for me and I had a short list. One of the tasks was to find a set of History of the World War.

Before I set them about the task, I decided to do one more Google search (since time had passed) to see if I could procure the series myself. "Of all the gin joints"–no, wait, wrong war! Of all the websites that I could have found a set on, I wound up finding a well-kept set on Etsy. I think the asking price was $75, so I immediately bought the set.

I present to you the seller's pictures: 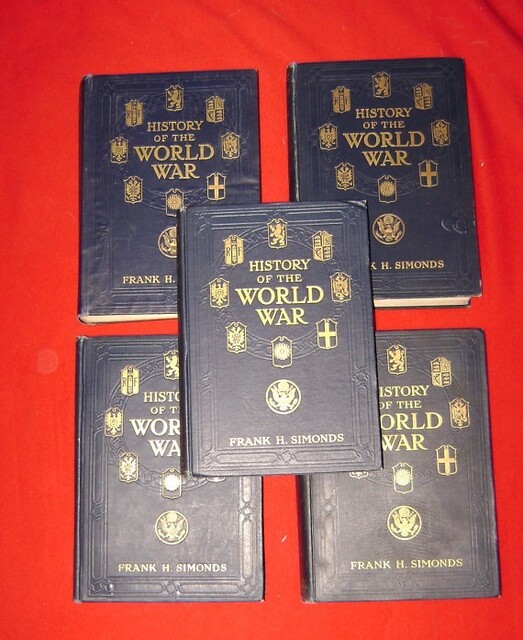 But the story doesn't end with just this series of history.

While I now have my own copy, I found something else extraordinary when I was searching for History of the World War: a ten volume series entitled The Literary Digest History of the World War published by the Frank and Wagnalls Company. I read the preface (or at least part of the preface) to this work and was under the impression that this series was also written at the same time as Simonds'; however, Googling during the drafting of this post has led me to come to understand that the work was published in 1920 and was a collection of reports, letters, etc. edited by Francis Whiting Halsey (no known relation to

Again, I present that seller's images: 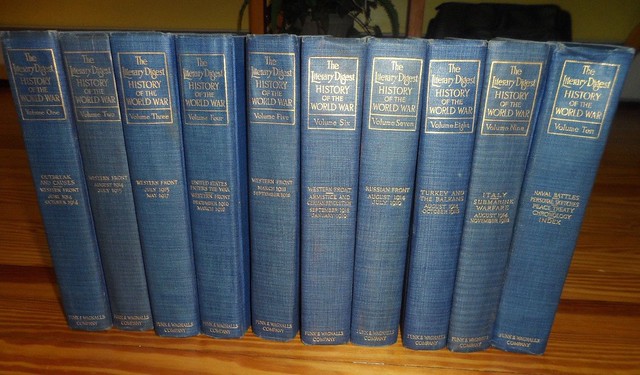 I was amazed when this work arrived. The box the books shipped in seemed too small to contain 10 volumes. I had thought, based on the seller's images, that they would be the size of History of the World War, but as you can see from my final image below, they are, in fact, about half the size. 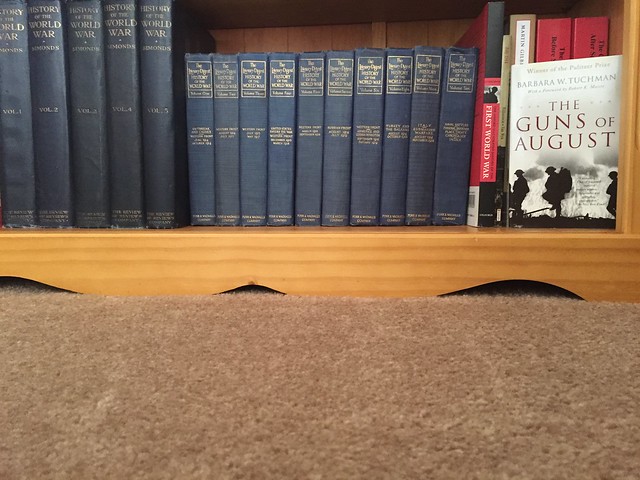 The image above is my World War I shelf. In addition to the to series I have written about in this post, pictured above are (left to right, back to front):

Books I need to add to my collection (Amazon Wish Lists):

I haven't read any of the three series on the shelf, and only about a third of The Guns of August. Nor have I read Martin Gilbert's book, nor any of the books on my Wish Lists. I have read both July 1914 and Hew Stratchan's book, for school.
Tags: books, world war i
Subscribe